My deepest sympathy and condolences the family, friends and colleagues of the soldier killed in Woolwich on 22 May 2013. 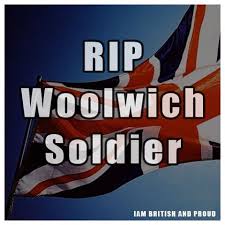 The Woolwich killing is not a religious one

The Woolwich killing has become another in a long list of terror attacks this year alone.  This senseless attack of an unarmed soldier in Woolwich has nothing to do with race or religion.  In fact, this and all other terror attacks, are  so far removed from religion that it verges on an attack of the Islam religion itself.

I am first to admit that I know very little of Islam and cannot begin to go into detail about how far this is removed from their religious views.  I can, however, quote the Quran for you:

No religion will ever condone the killing of innocent human beings.  Not one of them.

Why make it about religion?

Why then do we have lunatics, animals really, who kill in the name of religion?  They do nothing but create a further tear in the fabric of society.  Just look at Facebook or the twitter stream for #Woolwich today and you will see the disastrous effect this attack had.

Already there have been street battles between the English Defense League (EDL) and police, as well as two separate revenge attacks of mosques by men who call themselves Christians.

I have long been wondering about “the thing” that is missing in people who commit acts like these.  There must be a serious psychological problem somewhere, something that makes them unable to determine between right and wrong.  In an attempt to try and understand how the brainwashing process works, I turned to Google.

I did not have to search far to find lengthy videos and text glorifying death in the name of Allah.  There must be something wrong with me, because it just left with a sense of “WTF?!?!?  Do you honestly expect me to fall for that?”.

Sorry Jihad and Al-Qaeda, I am lost to you.   You have not a single religious bone in your body.

Add to the brainwashing a disregard for the law, as is clear in the fact that they did not try to hide their faces or run from the scene, and you have a ticking time bomb.

How do we end the ever escalating religious war?  With information on terrorist groups and recipes for making bombs so freely available, it will be a continued uphill battle to try and put a stop to the violence.

With all the technology available to us, I can’t help but wonder why these websites cannot be shut down and removed.  I’m all for free speech, but when free speech openly encourages the slaughtering of human beings, does that not infringe on at least some laws?  All governments and religious organizations condemn these acts, so why not draw up a charter of agreement between them to try and slow down the flow of information?

An interfaith condemnation is required, a call on people to come forward and expose those who preach these views.

These were the words spoken by one of the attackers:

We swear by the Almighty Allah we will never stop fighting you until you leave us alone. We must fight them as they fight us, an eye for an eye, a tooth for a tooth… I apologize that women had to witness this today, but in our land our women have to see the same. You people will never be safe. Remove your government. They don’t care about you. Do you think David Cameron’s going to get caught in the street when we start busting our guns? Do you think the politicians are going to die? No, it’s going to be the average guy, like you.

In a sense he is right, the politicians don’t care.  They will speak great words and plan and sit down for strategy sessions, but what will they actually accomplish?  The answer lies with the average guy, me and you, to stop the violence.

Revenge is not the answer.  The acts that we need to commit are to teach acceptance of different races and religions to our kids.  By teaching them love and respect for humanity we can slowly start to turn the tide.

I am a free spirit born in the Free State, 20 years to late. I am Ying and Yang. I am the girl next door who prefers daisies and peace rallies, but can just as easily rock at a rally. I love all things Latin and am sure that in my previous life (if that existed) I was Spanish. The dark side of me, however, tells me that I lived in Mother Russia. I am an over thinker par excellence , in constant search of answers to all things that makes us human. What we do and, more importantly, why we do it. I hope you enjoy my rambles and would love to hear from you. If you like it here, please come back, comment and share. If not, let me not waste another second of your time. All I ask is that you respect my space, be constructive and leave negativity at the door. There is enough of that in this world we live in and yes, in my head too sometimes. Not everything here will be liked or agreed with. Some of it will be downright rude, crazy and straight forward. Not everyone will like me and what goes on in my head, but this is my life and my space. Enjoy the ride View all posts by nanuschka

Say something, you know you want to! Cancel reply

This site uses Akismet to reduce spam. Learn how your comment data is processed.